Book Stories at the West End And Brisbane’s Third Places

“..third places, or “great good places,” [are] the public places on neutral ground where people can gather and interact. In contrast to first places (home) and second places (work), third places allow people to put aside their concerns and simply enjoy the company and conversation around them.” Ray Oldenburg 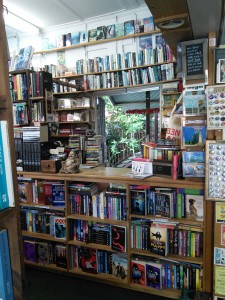 When I arrived to Brisbane I was determined to discover the most prominent intellectual hot spots of the city. My imagination was silently creating images of human beehives where argumentation was in the air and people were eager to sit down and discuss books and politics. So, when I walked straight on Queen’s Road and passed by the Convention Center – where the 2014 G20 World Leaders Summit will take place – I neither expected to chat with lawyers volunteering for charity nor to be introduced to the idea of “third places” by Fiona. In other words, here goes the story of Brisbane’s Third Places.

According to Concrete Playground1 Avid Reader and Bent Books are on the top of the list of the Ten Best Bookstores in Brisbane. Naturally, I had to visit them. Trying to blend in I hid the city-map and casually crossed the bridge from the city center towards the West End. My efforts to pass as a local girl were successful since soon enough I was stopped by a young British man in a red shirt who asked how my day was and whether I could spend some time talking about the “Save the Children Foundation”. I decided to stay and five minutes later I found out that this young man was indeed British, a lawyer who thought that working for nonprofit is the most “rewarding job” he ever did. I have to admit that I was pleasantly surprised but what seemed as five minutes was in fact thirty, so I bid my goodbyes and made a contribution: small but genuine.

After ten minutes Queen Street merged into Melbourne Street and I was again pleasantly surprised by seeing Greek restaurants and mothers scolding their children in Greek. As Kat told me later on, West End is famous for its Greek influence, which was prevalent in the neighborhood by the smell of the souvlaki sandwiches. And as I was looking at the “Ouzeri” I noticed that Avid Reader was right opposite the street.

There it was: 193 Boundary Street, West End

For Books That Satisfy

As soon as I entered there was crime on the left and literature in the right, a couple stands leading me towards the end of this rectangular space. At the end of the hall, the sunlight was inviting me to sit at the tables of the small café, where I did hear conversations about books and politics but in a much casual way than I anticipated. I decided to talk to the person I could vaguely feel the presence of; the one who is responsible for the strategic set-up, the one who was responsible about the discussions I could see advertised outside of the store and thankfully, that person agreed to talk to me. Her name is Fiona and she has been the human force behind Avid Reader for seventeen years. Because the interview is a de facto limiting medium there are many things that are left out – however, the things we did discuss with Fiona show that small business is perfectly compatible with a big sense of happiness.

My first question was a difficult one. If she had so sum up the philosophy, the history and the essence of this place – or in other words seventeen years of her life – what words would she use.

Fiona: “(Short silence) Well, Avid Reader is definitely community focus… we run book clubs and discussions, and try to match the right books to the right people. Of course the retail environment is tough and we work seven days a week but the book is not dead. It is much more complex than the electronic version of it.”

I wanted to hear more and especially how she viewed this place where we were casually sitting, strangers among strangers but brought together thanks to our love for books. As the conversation continued, Fiona mentioned this concept of a “third place” by Ray Oldenburg. In my mind, I was of course influenced by Jurgen Habermas and his ideas about the Public Sphere as well as Hannah Arendt’s but both of those political thinkers had something very specific in mind. A public sphere was not necessarily a place but it was mostly a concept and the bookstore I happened to be sitting in and having a conversation with a kind woman was a very specific place, a product of market forces but yet open to ideas. After all, good books were living on those shelves and I didn’t catch any copy of Fifty Shades of Grey anywhere I looked.

As we were talking and I was listening to Fiona’s soft voice I couldn’t help but ask her why did she choose to dedicate seventeen years to this Avid Reader? Surprisingly enough she mentioned Sylvia Beach – the very founder of Shakespeare and Company and whose library I was lucky enough to visit in Paris – who inspired her and as it looked to me, continues to inspire her even today since she instantly recommended me her biography when I asked for a good read (a classic question I always keep for later).

After the interview was done and I bid goodbye for a second time, I was wondering how “Bent Books” is going to be and what kind of atmosphere I will experience there; taking into consideration that both bookstores lived on the same street, roughly a five-minute walk from each other I expected something similar. Again, I was pleasantly surprised…

The bright blue on the front walls was not the only inviting sign when I saw Bent Books2 ; it was that window – or the open door as I found out later on – inside the store. And of course, that hard to define scent, known to all bookophiles around the world: the scent of books. A young woman with a sincere smile was sitting behind the counter, which weaved harmonically with the shelves. I smiled back and decided to explore.

First assessment: A great variety in Australian politics and politics in general, a strong hold in history – Anne Applebaum’s Gulag accounts, a couple titles by Eric Hobsbawm and of course E.H. Carr’s question “What Is History?” – followed by a fair selection in fiction. After my initial excitement was tamed I approached Kat and found out that she has been affiliated with Bent Books for thirteen years and owns it for about a year and a half. Unfortunately, we didn’t really have time since the place was busy but from some bits and pieces we did exchange I already knew I had to come back. Kat told me I should go to the garden in the back. The sign “more books” was promising so the decision was made for me, but as soon as I entered the garden I felt I had to cherish this moment. Let my mind perform its tricks and keep this “third place” in my memory, as I sat outside on one of the purple chairs and watched the sun play hide and seek with the clouds.

At that moment I was enjoying. But it was not a passive act, it was charged with thoughts and ideas. Here, I realized that openly relating to others satisfies a deeply rooted need that cannot be sated with mere argumentation. In other words, my initial expectation of finding a human beehive where incessant debate would rule was a very limited one. Instead, I found people talking about books, which overall increased their thinking faculties instead of mere hot-air talking gimmicks.

Thank you Fiona and Kat.