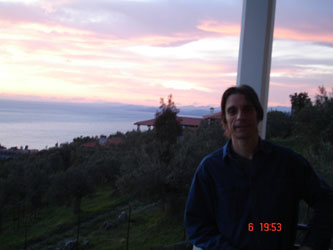 Angelos Mouzakitis was born in 1967 in Athens and studied Sociology at Panteion University. He was granted a scholarship from the State Scholarships Foundation (IKY) and was awarded a post-graduate Diploma (Master of Arts) in Philosophy and Social Theory in 1997, as well as a Ph.D. from the University of Warwick in 2003. He was assigned Jean Monnet Fellow during the academic year 2003-2004 in the European University Institute in Florence, where he taught at a post-graduate seminar while he was completing his research. He was assigned Post-Ph.D. Scholar of the State Scholarships Foundation during academic year 2005-2006. Since 1999, he has taught in several Universities of England (University of Warwick, University of Central England, Open University) and Greece (University of Crete, University of Patras, University of Macedonia). Simultaneously, he is a Module Coordinator at the European Civilization Course of the Hellenic Open University since 2004. He taught at an intensive undergraduate course in the Institute of Philosophy of (Alpen-Adria) Klagenfurt University in Austria during the academic year 2010-2011. On June 2011, he was appointed lecturer (at the discipline of “Contemporary Sociological Theory”) in the Faculty of Sociology in University of Crete, where he currently teaches until his official appointment is concluded. He has published various articles in Greek and foreign scientific journals and has participated in collective volumes. His Ph.D. dissertation has been published revised in English under the title: Meaning, Historicity and the Social: A Critical Approach to the works of Heidegger, Gadamer and Castoriadis, VDM Verlag Dr. Müller, 2008.