Publication of the 2nd Issue of Intellectum Journal (April-May 2007) 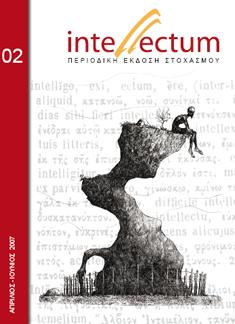 The second issue of the Intellectum Journal was published in 2,000 copies. Intellectum is freely distributed in university and central libraries all over Greece as well as in central bookshops and other selected public spaces of Thessaloniki (Moni Lazariston, Mylos club, Ianos bookshop, Emigre, Prigipos, Interni, Zogia, Tre Marie, etc).
This second issue of the Intellectum Journal attempts to take into consideration the current events but also offer a detailed presentation of other issues in times where dreams and expectations seem to have been dangerously shrunk in small cases of a ‘Super Deal’.
While examining the rich content of this issue, one can find out the interview with Richard Catula on the art of political communication, the views of Konstantinos Melissas and Diamantis Kryonidis on the modern Greek reality, the article of Dr. Charalambos Tsekeris on scientific modesty and the speech of the Oxford Professor Aggelos Chaniotis on ‘The European Universities and the Challenge of Globalisation’. Additionally, one cannot overlook the interventions of eminent academics on education which were presented in a conference of the ARSI group, in the Aristotle University of Thessaloniki in November 2006.

Finally, we would like to thank wholeheartedly the artist Dimitris Karlaftopoulos for his kind permission to reproduce his work ‘And now what?’ (2006) on the cover of the current issue.