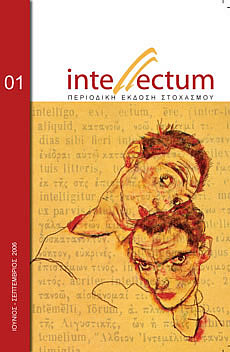 We are very happy to announce that the first issue of the Intellectum Journal (formerly known as Inter Pares) was published in July in 2,000 copies and is already being freely distributed.
The first issue can be found in university and public libraries all over Greece as well as in central bookshops and other selected areas of Thessaloniki (Moni Lazariston, Mylos club, Ianos bookshop, Emigre, Prigipos, Interni, Zogia, Tre Marie, etc). Soon it will be available the new website of the group at www.intellectum.org (as well as the previous issues o the Inter Pares Journal).
In the current issue there is a special tribute to literature. So one can read the excellent short-story “The Cogwheels”, the brief article “In Quest of a Parking Space” and in the column ‘Academic Wanderings’ the interview with the awarded Scottish writer Paul Jonhston.
Apart from literary texts, one can read the essay of Professor David Oderberg on scientific fraud, the article of the Vice President of the Thessaloniki Bar Association Dr. Yanna Panagopoulou on the aspects of international legal profession, the article of the Ph.D. candidate Giorgos Sotiriadis on legal purgation as well as the speech of Professor Elisavet Simeonidou-Kastanidou on money laundering.
Finally, there are essays on various issues such as the global governance, the assisted reproduction, the reflexive conception of social space, the relationship between freedom and loneliness, the Mohamed’s sketches, etc.

The Intellectum magazine (former Inter Pares) constitutes the evolution of the Inter Pares magazine.
The articles in this magazine are written in Greek, but the following articles are also published in English (https://www.intellectum.org/gb_teyxh.htm#ItlIssue1).