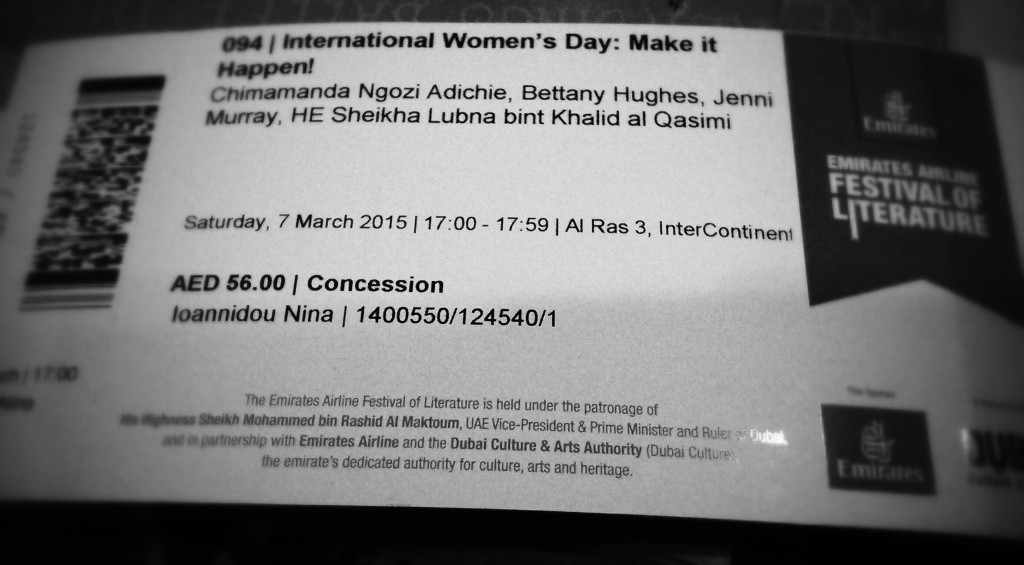 I have never heard of Nawal El-Saadawi nor all the women panelists who were invited to talk at the Emirates Literature Festival about “making it” happen for women. This year’s theme supposed to reflect “effective action for advancing and recognising women”1 around the world, and a literature event seems like a stepping stone to the right direction, especially if it is hosted in a middle eastern country. I was intrigued and curious and naturally, I had to be there.

The first lecture I attended was delivered by the Egyptian feminist writer Nawal El- Saadawi who is 84 years old and a dissident “by nature, by writing and by every breath.” The talk was short but El-Saadawi was a dominating presence. She started with a direct critique of the surveillance-state, briefly shared her experience as a political prisoner, and made an important comment regarding the true value of education.

“In my case it was the eye of god [that] was spying on me” she declared full of conviction “that’s why I’m against religion and against politics and against all governments of the world.” As she moved on to her imprisonment in Egypt, she underlined the importance of speaking up and being truthful especially for women who submit to oppression. Towards the end a member of the audience from Pakistan asked her in what ways her experience as a medical professional influenced her writing. “I became more ignorant while I was in medical school… because they teach us by division. They divided the country and they taught me to divide the body from the mind. But you can creative only when you are whole, united and aware. ” Suddenly, I found myself clapping and the session was over. She was rushed outside of the premises to catch her flight back to Egypt.

An hour later her thoughts were still resonating with mine. As a political theorist I dont particularly “hate” political configurations of power but it seems that those “anonymous” configurations truly “hate” women. In Saadawi case, the response to such oppression is found in active resistance, speaking up and seeking unity with others. But again, if we all unite against all governments of the world how can we secure meaningful political action that will last more than a moment? How can we engage ourselves in effective actions that will last? Clearly, one way of going about it is commitment. Commitment to be independent and think for yourself. That was part of my theoretical resolution but I still had one panel to attend where listened to different opinions about “making it happen.”

Chimamanda Ngozi Adichie (the writer), Bettany Hughes (the historian), J enni Murray (the TV presenter) and HE Sheikha Lubna bint Khalid al Qasimi (the businesswoman) comprised the final panel. All the women agreed that part of realizing gender equality is to offer equal pay for equal work. HE Sheikha al Qasimi especially pointed to the respect factor, which comes through accomplishment. “You have to deliver first” she stated. All the panelists agreed upon the equal opportunity, then the conversation tilted towards the education question and how feminism should be taught not only to little girls but to little boys as well. Undoubtedly, the recent events of gang rape in India ushered the topic of sexual and domestic violence, which finally forced the discussion towards the visibility of women and the imbedded cultural idea that women have to be likable.

When the question about visibility of women was raised the historian Hughes protested “if we look in history from more than 3,000 years it seems that half of the human population -women- was completely erased… the case of Marie Curie comes at point… when she discovered polonium the newspapers refused to write about it…” HE Sheikha al Qasimi then mentioned that “women are not competitive by nature…” to which Adichie replied “have you ever been to a girls’ boarding school? They are conditioned not to be a certain way, they are conditioning themselves to be likable …instead of just being themselves.” As the panelists were expressing disagreement Murray defused the tensions by saying “The only woman I can think of that wasn’t likable in public was Margaret Thatcher…The problem is that women tend to be not nice in private most of the times.” The panel was open to questions from the audience where the issue of the migrant work and the treatment of housemates or domestic help was mentioned. No response was really offered to this topic apart from awkward silence. Then the panel was over and everybody was thanking everybody else.

Again, I found myself charged with questions… El-Saadawi example truly inspired me to think about concrete political action that will benefit women. But the last panel with all these different opinions left me confused… First of all, how can we achieve equal opportunity for all amidst a system that allows -and even promotes- cheap labor, no unity among the workforce and a culture that determines women’s behaviour? Perhaps, allowing such differences in opinion to be voiced counts as meaningful action but again we just need to agree on standards and El-Saadawi attitude clearly shows that we need to take a stance on what is right and what is plainly wrong.