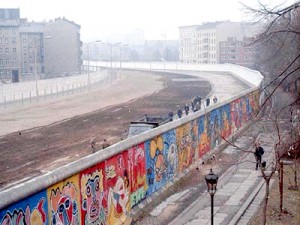 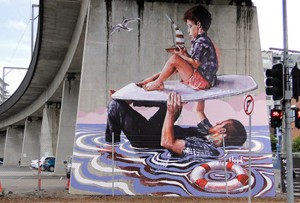 The symbolic significance of the Berlin Wall has been coined as a “constant struggle between open and closed societies;”[1] and the commemoration of its Fall aptly points to the alleged end of the East versus West division. Surprisingly, divisions have been stronger than ever and new “walls” have taken the place of the old.  The G20 Summit in Brisbane offers a salient example of a political ritual that employs artistic qualities to advance its own power-rationalities, as most political rituals do. However, the main question is our understanding of such processes and whether we take an active part in creating those very power divisions we so easily condemn. Therefore, looking back to the Fall of the Wall from the perspective of new “power machines”[2] or the G20 summit constitutes an opportunity for profound reflection on power-arrangements and our understanding of the division experience. The inclusion of artistic themes serves as a paradigm for our response to the new divisions.

If the Berlin Wall  was the most concrete manifestation of the Iron Curtain, the G20 summit has exemplified the importance of cooperation regarding the Global Financial Crisis (GFC), or more concretely, the lack of it. In both cases, artistic themes have been used in order to communicate the experience of unity and cooperation, while in fact ideological divisions have been stronger than ever. Before proceeding to the artistic messages that contradict reality, it is important to note that there is still art that has a meaningful role to play in the understanding of our political predicament. Therefore, for the purposes of this comparison, I will include two instances that have been succumbed to the rhetoric of power and two artistic moments that have created some room for meaningful reflection.  Those moments include: the iconic picture (later turned into a graffiti) of the fraternal kiss between Leonid Brezhnev and Erich Honecker (on the East Side part of the Wall) as well as the commemoration of the Fall by 8,000 illuminated balloons;[3] while Brisbane’s The Pillars Street Art and the colorful projections on the Old State Library opposite Queens Park. Undoubtedly, the use of these four “instances” does not suffice to capture the perplexity of power-art relations but it points to the unspoken connection between  them that so often goes unnoticed.

Brisbane is the capital of Queensland’s state and proudly pronounces its own distinctive history and especially, its support towards arts and sciences. In the context of G20, a three week program of free cultural events – supporting the theme of color and light – are scheduled around the city.[4] The projections on the Old State Library (see pictures below) and the message “The Changing Face of Brisbane” on the facade of the Treasury Hotel[5] create an atmosphere of pride and excitement about the economic cooperation of the future. However, the symbols of economic growth and progress, which dominated the projection, come to direct contrast to the actual content of G20. There, the main point of contention regarding the Summit is that despite the dramatic increase of global economic integration, the international economic cooperation has been restricted to financial matters only.[6] Furthermore, as the symbol of growth and progress has been omnipresent, the question of what exactly caused the Global Financial Crisis (GFC) is still under dispute. When parties do not have common understanding for the elementary, how is it possible to engage in significant cooperation? Nevertheless, the fact that complicated financial assets were traded between financial institutions over the counter and without any regulatory oversight is hard to deny.[7] Thus, the issue of constant economic cooperation objects the reality of the Summit, which is restricted to strictly financial matters excluding the issues of international governance. In this case, the artistic intervention promotes an idea absent from the official agenda. 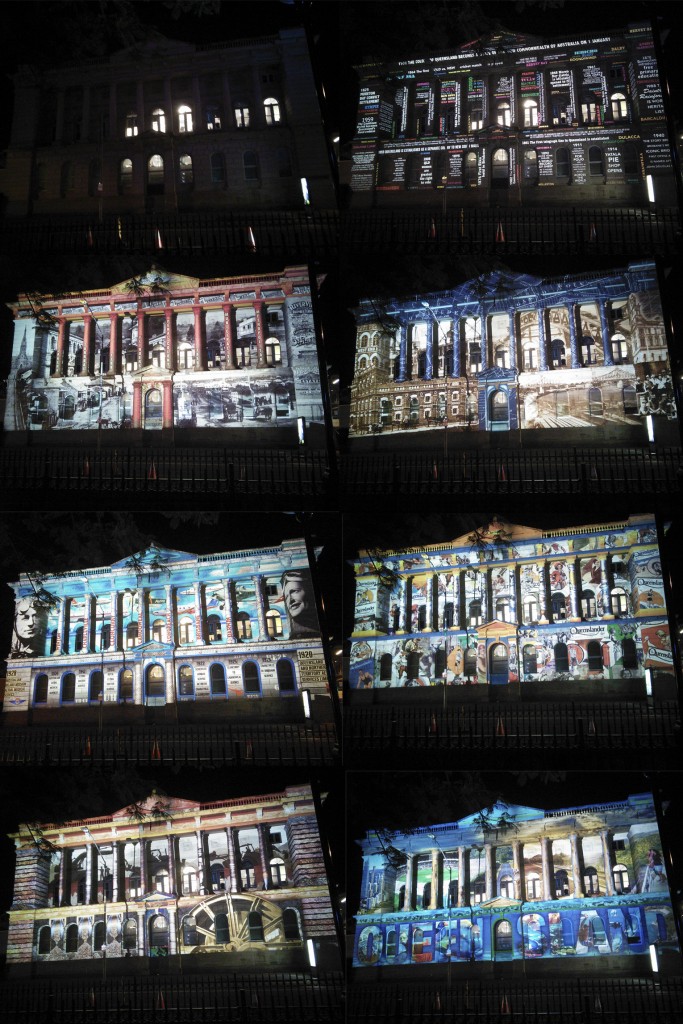 Furthermore, this is an instance where artistic qualities are used in order to buttress the nationalist feeling of a specific community, since it appeals to emotions of pride and even love for a specific political arrangement. Nothing is wrong intrinsically with feelings of pride and love but it is important to differentiate between emotions that set us apart (and consequentially, create new divisions) and those that bring us together.[8] The crucial point is the type of the political arrangement mobilizing the power and generating emotions that serve its purposes through artistic devices. The narratives that those projections in Queens Park reveal connect the ideas of constant growth (at any cost) with the current power, while the spectators are encouraged to internalize these ideas. Accordingly, these ideas as such seem to come to direct opposition to the claims for economic cooperation the G20 ritual supposedly upholds, creating a state of paradoxical messages that are concocted with the assistance of artistic devices.

What is our responsibility when such divergent messages are imposed on us? How can we take an active stance against these paradoxes? In this case we need to revisit the actual properties of art and what is their connection with the so called “power machines.” The work of Giorgio Agamben deals extensively with this issue and according to him, “art is a suspension and transferral in the plane of contemplation”[9] where we de-activate the use of common sense and open up “for other uses” of the artistic medium. Where our relationship with capitalism is concerned the “higher spheres of human activity are included in the big machines of a systematic cultural industry”[10] and consequently, the benefits of artistic narratives are used for advancing the purpose of power. Thus, in order to disturb this systematic exchange between the higher spheres of human activity with the dominant power structures we need to direct our attention to artistic messages that capture the overall public sentiment and transform it into a meaningful message (as the Fraternal Kiss demonstrates later on).

The Brisbane projections however, are not the only ones that entail contradictory messages concealed with the cloak of art. The 8000 helium-filled balloons that flew above Berlin commemorated the “passion and courage” leading people to “tore down that which divided them, in search of peace, freedom, unity, democracy and prosperity.”[11] However, such celebrations do not support the idea of unity as such, but rather they initiate a ceremony of glorification for a very particular type of power, the capitalist model instead of a communist experiment. The use of the balloons lighting up the night and disappearing into the sky, spread the sentiment of hope, however this is just a momentary effect; the most important issue is what kind of divisions we experience after the Fall of the Wall. And such divisions are ubiquitous in the rise of neoliberal orthodoxies, the dogma of constant growth and the empowerment of negative nationalist sentiments around the globe sustained by the emotional projections of love and pride.

And yet, there are ways to respond to divisions and paradoxes with integrity and purpose. The fraternal kiss between Brezhnev and Honecker and the the Pillars Street Art Gallery offer some instances of positive responses against political rituals and contradictory power exhibits. Firstly, the “Fraternal Kiss” comes from a political ritual of the 30th anniversary of the German Democratic Republic,[12] but through Art it became a statement that captured the sentiment of division and externalized it as a meaningful experience. Here, the activity of art as “suspension” and an opportunity to use the message in a different way is clearly manifested. In the case of the Brisbane Summit there is graffiti from the Pillars Street Art on Merivale Street footpath[13] which shows another example of a significant response to the power constellation.

It is quite often discussed that Australia and G20 do not recognize Global Warming as an economic issue and therefore, is not included in the official “agenda.” The idea that our governments have the power to dismiss issues that are not strictly speaking “economy-related” but affect seriously our well being, is a telling fact of today’s nature of power and ideals. Furthermore, this exclusion shows the potential of art to articulate new potentialities for dialogue and constructive meaning. More specifically, the graffiti (see picture above) shows a flooded street and a man holding a child on a surfboard and even though there might be a number of interpretations for this particular piece, the allusion to global warming is hard to miss. In spite of the exclusion of the topic in the political discourse, it was included in the dialogue through art demonstrating the existence of free space in this realm that has not been monopolized by the “machines of power.”

The artistic instances discussed above point towards the necessity of understanding and critically evaluating our past experiences of division with the rising new. Today’s articulations of power are less tangible and more sophisticated, since they mobilize emotions through art and distract us from the actual problems we need to solve. Both the commemoration of the Berlin Wall and the cultural festivities of the G20 Summit display the importance of questioning power even when our rational faculties are distracted by art. After all, art is a tool just like politics and it is our responsibility to use them accordingly.

[2]Giorgio Agamben’s term taken from: Alexei Penzin, “Profanation of the Profane, or, Giorgio Agamben on the Moscow Biennale,” Rethinking Marxism, 20:3, 413-426

[3]Philip Oltermann, “ A city undivided: the fall of the Berlin Wall commemorated 25 years on”,

[4]A complete list of the cultural events can be found on: http://g20cultural.initiatives.qld.gov.au/

[5]The Changing Face of Brisbane, http://g20cultural.initiatives.qld.gov.au/events/the-changing-face-of-brisbane.html

[8] Martha Nussbaum’s work on emotions brings this argument to the fore as captured in the interview with Jasorlaw Kuisz at Eurozine: http://www.eurozine.com/articles/2014-09-03-nussbaum-en.html

[11] Jean-Claude Juncker for the Guardian: http://www.theguardian.com/world/2014/nov/09/berlin-wall-fall-remembered-residents-25-anniversary

[13] One of the graffiti of the footpath on Merivale Street: http://g20cultural.initiatives.qld.gov.au/events/the-pillars-street-art-gallery.html