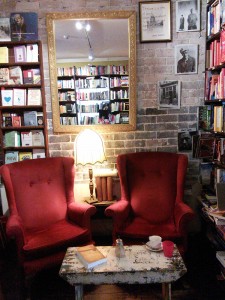 Today is the last day of the Vivid Festival in Sydney1; a venue comprised by three core concepts – light, ideas, and music. As I walked in the downtown area I could see beams of light pointing to an unknown direction, changing color and at least a dozen of light-specialists and security guards overlooking the entire process. Thankfully, my eye could still catch posters’ logos like “Sydney Does Not Hibernate” and advertisements about the Film Festival that has been going on for about a week now – just to make me realized the actual importance of celebrating creativity, diversity and ideas.

As part of the “ideas” module the Festival hosted speakers from the art, business, law and so many other professional worlds who spoke about the technology, the importance of entrepreneurship and above all the necessity of diversity, which apparently breeds opportunity.2  However, Vivid wasn’t the only event that was fighting for the limelight. There was also Sydney Writers’ Festival whose slogan was “It Is Thinking Season” with a beautiful visual representation and pod casts3 of the writers’ interviews. Thus, such a creative fusion made me re-think my short week-long stay in Sydney.  My initial goal was to spot all those places where one can find a good selection of books and some air of intellectual promise. However, I decided to pay more attention to their surroundings and not only their inner morphology. What kind of pattern could I detect while rediscovering those places? What differences can one notice from downtown Sydney to Newtown (West) and from there to Bondi Beach (East)? In other words, was the formula “more books equal more ideas” still alive?

I started from the city center. George Street was a block away from my accommodation, thus inadvertently my starting point was Kinokuniya. In spite of being located on the second floor of a mall, the bookstore was breathing artistic and intellectual curiosity. Big windows with breathtaking view and light green bookshelves with ample room dedicated to visual arts and Japanese tradition – it was definitely an artistic venue. Only later I discovered on their website that they ardently support the idea of “bookstores … as centers for the promotion of culture and the arts and not merely as outlets for selling books…”4

Next on the list was Oscar and Friends Booksellers and Basement Bookstore, which took about a thirty-minute walk on Pitt and eventually turning east towards Crown St. It was relatively hard to find since the entire building was covered in construction curtains but I managed nonetheless – after walking by it at least twice and asking for directions. When I entered this pendagon-like establishment Toby informed me that they have another store at Double Bay (which unfortunately I didn’t visit) and when I asked the whereabouts of the owner: “So is the name of the proprietor Oscar?” he told me that actually it was named after Oscar Wilde… I smiled my embarrassment away and looked around. The fiction selection was good as was the non-fiction, but the real interesting shelf was the special picks. I was informed that the books there were selected by the bookstore’s employees and displayed separately and at 10% off. “We are all big readers here, so we decided to promote the ones we enjoy the most” Toby explained. I grabbed the Goldfinch by Donna Tartt (from the special shelf) and The Luminaries by Eleanor Catton (from the fiction angle) and I left the pendagon for the basement. Basement Books hosts temporarily all those items that were not sold on the retail price during the year and offered to the public at knock off prices at the end. I have to admit that one can indeed find interesting reads there but it definitely prioritizes convenience over intellectual sense.

So far, I could discern a certain taste from those book shelves that even Basement had – a taste for good literature – and I was wondering if it will change when I get out of Sydney’s center. I waited for the bus number 333 to take me to the Bondi Beach via Oxford Street. As I looked outside the window, I saw Ariel Bookstore on my left and Ampersand on my right respectively. I promised to myself to stop by, but unfortunately the drive turned out to be longer than I expected and the rain forced me to seclusion for the rest of the day. Nevertheless, I did make it to Gertrude and Alice, 46 Hall Street.

It was a weird feeling because as I walked in, I instantly thought of Shakespeare and Company of Paris – but that impression was extremely short-lived. I didn’t meet the owner Jane Turner but I did talk to the people who were there on the working clock. The establishment was truly historical – especially from the choice of furniture and the shelves. Just like in Shakespeare and Co. there was a true bond between the bookshelves and the ceiling, a relationship I am sure that Gertrude Stein and Alice B. Toklas would have endorsed and approved. Apart from the historic façade and the pervasive intellectual air, the best surprise was the ample book-knowledge of the “employees”. It seemed that they were determined to promote taste starting from the Man Booker Prize shelf – gloriously standing in the middle of the shop – and then depending on individual interests walking you through foreign book-lands. I left that place carrying Hannah Arendt, Julian Barnes and Marcel Mauss in a paper bag but still couldn’t feel a strong difference between downtown and west-side. Undoubtedly, the beach softened people’s looks, but that active engagement of those who worked in the places I visited so far made me think of more than just the practices of an efficient business model or a retail chain.

The last part of the comparison-quest slash libro-bonanza I was experiencing left me with the east part of the city, New Town. Again a long engagement with the public transportation – this time it was the train – but as soon as I walked on the pavement I found out that the first free public library in New South Wales was opened in New Town Hall in 1869; so historical reminders persisted here as well. I was looking for Better Read Than Dead and Gould’s Arcade on this street before continuing towards the University of Sydney where Gleebooks and Sappho Books were standing side by side. By now, some flashes of some sort of pattern were looming over my head but I was too preoccupied with finding the correct street address rather than rationalizing my quest. When Better Read Than Dead turned out to be right in front of me. 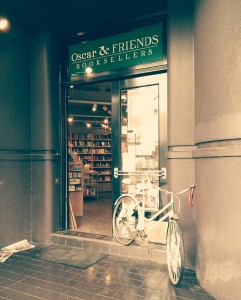 The store had green shelves and looked like a columnless stoa where I expected to hear the voice of Zeno on the importance of stoicism. But instead I spoke to J. and checked their bookshelves. Surprisingly, their non-fiction selection was a true treasure since I could find a couple of Alain Badiou’s works and again talking to the beautiful women behind the counter was a sheer pleasure since I could feel that they took it seriously. Just an example of this was the book recommendation that a young beautiful lady recommended to me: Blindness by Jose Saramago. It was the first time that I heard that name but it wasn’t the first time I was asking for a book recommendation. In fact my question was “What book had influenced the way you see the world?” and I got amazing answers every single time. Regrettably, I couldn’t ask for a book recommendation at Gould’s Arcade as the owner of that book establishment recently passed away. The shelves at Gould’s were white, with ample space and red staircases to the second floor. With a portrait of Karl Marx and a painting of soviet realism I felt that from the Ancient Greek era I walked in to Communist Russia of the early thirties. The majority of books were actually about communism and I could find a number of them in Russian. And here it hit me! So far, every single place I visited apart from their historical touch and an intellectual eclecticism they all embraced their quirkiness and firmly stood for their community. Perhaps it was the book-rush or the time of the day I tend to see things in a hyper positive way, but it was true. 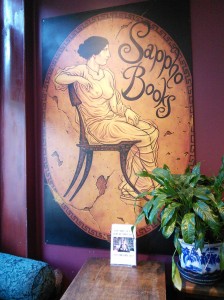 My final stop was Sappho Books and Gleebooks cozily inhabiting the same street and in fact being “close” neighbors. I was thirsty so I stopped by Sappho first. The café was loud and I mingled instantly with the young crowd of students that came there for the same reason. Their bookshelves were slightly darker with a great deal dedicated to music, films and Art. However, the entire atmosphere was more about the café rather than the books. So after I stared to my empty cup for about two minutes I decided to finish my book adventure with Gleebooks next door – literally. The atmosphere completely changed. Gleebooks felt cozy and inviting without the restaurant-like clamor. It was also evident from the bookshelves that they were more academia-inclined. As I learnt later Gleebooks does provide some of the syllabus readings to the students of Sydney’s University but it also offers variety for many book warms. This is where I met Cecilia and we started talking about philosophy (she is a philosophy student and focusing on Spinoza’s work) politics and of course books.

After we bid our goodbyes and I had to walk to my accommodation I tried to unite all these places with one common thread. From Kinokuniya’s clearly artistic values to Sappho’s coffee-drinkers’ joint – words like different, community, creativity were blurring my thoughts. The Vivid Festival was about celebrating the eureka moments of all kinds of industries with the demonstration of colorful lights around the city. But I felt that the people living in Sydney – especially the ones I met at all these bookstores – are the true light bulbs. Open to ideas, open to other people and above all embracing diversity and community. You are truly VIVID … I wonder where is our VIVIDness?

1.More details and information about Vivid Festival can be found at: http://www.vividsydney.com/

2. Actual talk delivered in the theme of “The Future of Work” found in the Vivid Ideas Magazine, p. 9, http://d3ed31k62emq3c.cloudfront.net/wp-content/blogs.dir/1/files/Vivid-Ideas-B2B-Program_A5_lowres.pdf

4. Kinokuniya mission statement can be found in its entirety here: http://www.kinokuniya.com.au/about_us