Words’ Worth, the Munich Readery and the Pi-Factor 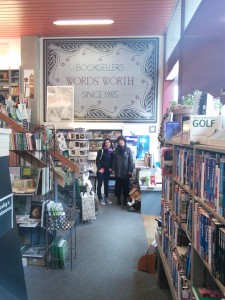 As the concierge told me– “Munich is like the extra sausage, completely different from the rest of Germany.” I was intrigued since I didn’t know how to understand his statement…exactly. In any case, I found beautiful green parks, with notable historical references (such as the John F. Kennedy Bridge) and friendly people. The two main stops for the day were the Words’ Worth English Booksellers at the Humanities Building of the University of Munich and the Munich Readery.

Schellingstrasse was relatively easy to find – I had to walk under the JFK Bridge, keep straight for about ten minutes, turn right on the Max Joseph Bridge, until reaching the English Gardens. At the English Gardens I realized that any community that appreciates public spaces – a park is a pertinent example – seems to possess an understanding of true happiness. For those who don’t mind wandering around can definitely try the path from the Chinese tower to the Japanese falls, a refreshing sight for a chilly April morning. At some point I had to get out of the Gardens, just to find myself opening the door of Words’ Worth Booksellers. There I met Barbara and conducted a relatively typical interview, which because of her presence and personality ended up feeling more like a warm welcome.

After I introduced myself and we sat down at her desk behind the curtain on the second floor – I opened my little red notebook and started the questions in a more or less ordinary fashion:

ME “Barbara, do you think that the physical book will survive this public demand for E-books?”

Here she surprised me with a smile.

BARBARA “Well, it is more a question of survival for independent bookstores rather than the books’. People always want to “feel” the pages and interact with booksellers on a deeper level. For example, one of our frequent customers decided to become an English literature professor at the University of Munich and still keeps coming for the variety we offer. But since Amazon, things have changed.”

BARBARA “But in those countries Amazon hasn’t established its grip yet, while in Germany we experienced a stark decrease in sales because of it.”

ME “Thankfully, people still read here in Munich, right? (We both laughed)

BARBARA “They do, but not as much as they used to. If I had to compare it to my university days our reading load was at least fourfold from today’s students and unfortunately people from Munich don’t appreciate as much the selection we offer. However, people who visit us from other cities and especially expats support our corner under the humanities building.”

ME “Speaking of which, I have observed that this aversion to reading stems from Academia itself, as they don’t promote the qualities of Humanities-type thinking. People don’t want to be eloquent anymore…”

BARBARA “Exactly, and because of technology everyone is trying to be as short as possible in their communication.”

ME “What about you? Why did you decide to be here?

BARBARA (laughs) “Well, it is definitely not a job one can make money – that’s for sure. But because I meet different people every day, never feel fatigued or bored I would not change it for anything else. And the people who work here are truly amazing.”

And my final question:

ME “Barbara, thank you so much for your time. I always ask for a book recommendation towards the end of a conversation. What book would you recommend for the readers? A book that made you think differently perhaps?

BARBARA “Hm…that’s a hard one. But if I had to choose that would be Ulysses by James Joyce as it changed the way I think of life and of course the British detectives – you are never bored with one.

I thanked her once again, chose a copy of Adorno’s “The Culture Industry” and snapped a picture with her from the main level. I didn’t really want to leave that cozy place but time was against me. Next stop, four blocks down of Schellingstrasse was the Munich Readery exalted as the best second-hand bookstore in Munich; I had to check it out but after a fifteen-minute walk I was still carrying the smile Barbara shared with me. I was still smiling when I opened Munich’s Readery door – just to be greeted by a very different person, with precise gestures and a bookshelf-imprint tie. The proprietor’s name is John Browner.

John was helpful when I asked for Hannah Arendt’s books (for some reason I always ask for her) but I could detect a certain tinge of gruffness notoriously popular among New Yorkers. I kept browsing the shelves and was delighted by the great variety of novels but I couldn’t decide how to approach the proprietor. A typical question-answer interview wouldn’t suffice. So I started talking about books – notably about Iris Murdoch – and any book recommendations he had to offer. At this point, John lightened up, became more animated and even agreeable. He pointed out a shelf dedicated to “Proprietor’s Picks” where I spotted “Wittgenstein’s Poker” by David Edmonds and John Eidinow. John talked about this book for at least five minutes and only then I decided to tell him that I am actually a writer.

His tone didn’t change but I think he was willing to talk more. When I mentioned Amazon and its threat towards paper-back books’ he replied:

JOHN “Well, this is really just conventional wisdom talk. I believe that the stores that closed were just not good enough to compete with the rest, so more room for us.”

ME “And if you had to describe your bookstore’s philosophy what would that be?

JOHN “We are definitely community based and organize many events for the neighborhood such as story-reading for kids and book clubs. But above all we have a well-organized establishment where the readers can browse easily through our shelves.”

ME “What else do you offer to people who come here – maybe apart from your presence?”

And at this point I decided to surprise him and ask him something unconventional from the standing point of a typical interview.

ME “Happy from doing what you do I mean.”

I thanked him and left the store with mixed feelings. Yes I was carrying Primo Levi, Wittgenstein’s Poker and Iris Murdoch in my backpack but I kept thinking of the diametrically opposed personalities I encountered. On one hand it was Barbara who even at this chilly April morning had plenty of sunshine stored in her smile, and further down of Schellingstrasse there was John who was extremely efficient in his books’ selection but again too reluctant to show some warmth. But as I was walking pass the English Gardens I felt intellectually charged from both – albeit in different ways but again in the same intensity. Perhaps this is what the concierge meant after all…things are different in Munich.

Check out their respective websites: