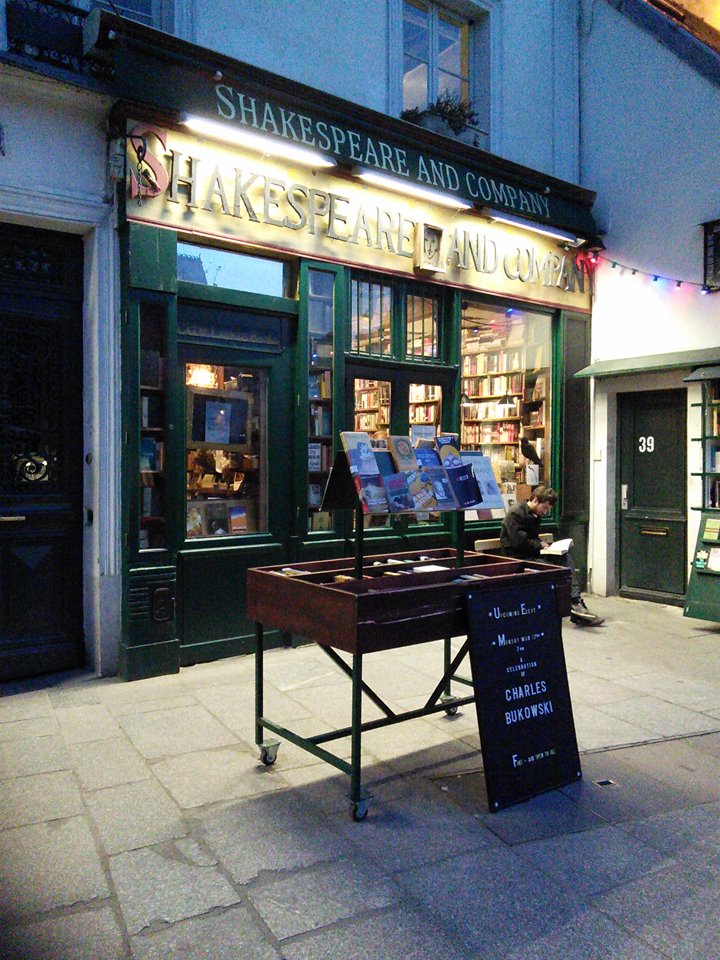 On the 37th rue de la Bûcherie – opposite Notre Dame – downtown Paris one can walk in Shakespeare and Company Bookstore, it also hosts a library, a piano “room” and writing spaces dedicated to fledgling authors. The bookstore was thronged with people and it was hard to move about the different sections, however I managed to get upstairs where the “Sylvia Beach Memorial Library” was and sat right in front of the only window overlooking Notre Dame and the city traffic. While I was in that space I read about a different bookstore’s visit: Professor Dimitris Christopoulos exercised his observation skills in the “Free Thinking Zone”1 bookstore downtown Athens. His observations were quiet telling about the current dominating political rationality in Greece, as well as the role bookstores play in the public dialogue. In my understanding, Professor’s Christopoulos opinion not only points to the political sensitivities in Greece, but can be extended to the general problem of political evil. Surprisingly, independent bookstores – the actual independent bookstores – offer something invaluable: spaces for thinking and discussing such issues. Therefore, I take the article about “Free Thinking Zone” as my starting point and subsequently argue that independent bookstores play a significant role in understanding political evil, which presupposes any fight against it.

Professor Christopoulos asked a simple question while at the Free Thinking Zone bookstore:

As one can predict, the entire article stemmed from this response as it constitutes a paradox: “How come in one of the bookstores that proclaims itself as a “Free Thinking” space, political controversies –such as the leader of a terrorist organization – are exempted?” Throughout the article, Professor Christopoulos asks –and rightfully so – what will happen if such paradoxes multiply and anybody who is seen as a terrorist, a radical, a war-criminal etc. is ousted from public space and consequently, from the public dialogue. Furthermore, the particular aspect of political evil (in this case Dimitris Koufontinas) demonstrates a dangerous trait in political-thinking, unfortunately, dominating not only in Greece.

Jurgen Habermas’ work Structural Transformation of the Public Sphere has been a dominant point of reference for anybody who writes about the public sphere. However, in this case, Douglas Kellner offers a clear summary of Habermas’ main contribution:

“[Habermas] describes a transition from the liberal public sphere which originated in the Enlightenment and the American and French Revolution to a media-dominated public sphere in the current era of what he calls “welfare state capitalism and mass democracy.” This historical transformation is grounded…in the culture industry, in which giant corporations have taken over the public sphere and transformed it from a sphere of rational debate into one of manipulative consumption and passivity.”3

Undoubtedly, in Barnes&Noble today – those stores that left at least – rational debate or any instantaneous discussion of “general interest” where “citizens behave as a public body when they confer in an unrestricted fashion”4 do not take place. Yet, independent bookstores offer a particular experience that facilitates such discussions and as they attract people who are most likely to ask questions of public concern such as students, writers, bibliophiles or any individual with “general interests”.

Moreover, not every public space can be treated as public sphere but those bookstores, which offer the opportunity to gather, interact and discuss freely resemble the characteristics of cafes – where the public sphere of bourgeoisie was formed according to Habermas. More specifically, three main criteria that were met at the salons or cafes: social intercourse was realized in absence of laws of market and the laws of the state, the intercourse was emanating from common concerns among private individuals, and finally, the public was inclusive in principle as “in public everyone was entitled to judge.”5 Independent bookstores offer all that and some of them have claimed this potential by including a “discussion-area” in their stores or organizing such discussions on a daily basis. Furthermore, by including in their shelves controversial/thought-provoking topics, for example in Shakespeare and Company some titles that come in mind are Sex and the Citadel: Intimate Life in a Changing Arab World by Shereen El Feki or the Theoretical Writings by Alain Badiou, they offer the readers a platform to formulate their judgments. The choice of controversial material leads me to the second part of this article…

Understanding Political Evil as a Reflection of Public Sphere

In his recent book Poltical Evil Professor Alan Wolfe explores the contentious issue of political evil and its role in American foreign policy (heavily relying on the presidency of George W. Bush and especially, his War on Terror). Professor Wolfe argues that in order to combat agents of political evil (terrorists for example) we have to refrain from psychoanalyzing it, equating political evil with absolute evil, and viewing past practices –such as the policy of appeasement against Hitler – as constant points of references. He purposefully uses terrorists in order to divert our attention to the real problem – the increasing emotional dimension of political decision-making and its stronghold of public opinion. As he mentions:

“That monsters really do exist in this world is beyond doubt. But as tempted as we may be to respond to their acts by drawing the sharpest possible lines between them and us, such a response suffers from one fatal flaw… it conflates evil in general with political evil in particular.”

But in order to be able to recognize such “conflations” and acquire distance from emotional attachments one has to find the time, space and others willing to listen and discuss such distinctions. In the Greek context of Dimitris Koufontinas (and his book) he doesn’t even enter the public dialogue and any references to his influence on current politicians are instantly (and ardently) denied. One can understand such reactions from current politicians, who are unwilling to align themselves with a terrorist-organization leader, however, banning his book from public display and dialogue, simply shuns us from exercising our judgment. The worst aspect of such “shunning” is the monopoly of his narrative that can be used and distorted by extremists of any flavor.

Thus, one can infer that the choices independent bookstores/bookshops make reflects the permeation of emotion in the Greek public that can be linked with the overall immaturity in dealing with political controversy. Thankfully, individual voices, such as Professor’s Christopoulos, still exist and point us to the right direction.

5. Jurgen, Habermas, The Structural Transformation of the Public Sphere: An inquiry into a Category of Bourgeois Society. Translated by Thomas Burger with the assistance of Frederick Lawrence. (Massachusetts: Polity Press, 1989),36-37,40

6. Alan Wolfe, Political Evil: What It Is And How To Combat It, (New York: Borzoi Book, Alfred A. Knopf, 2011), Chapter 3, Unrelenting Evil Without (Kindle Version)